Viviana’s story ends in gratitude, but begins with illnesses. She had polio as an infant, and typhoid as a young adult. “When I was nineteen years old, I was in a coma. I was at the University at Trujillo in Northern Peru and working for a political party. I was working in the slums, and I would eat anything, and I got typhoid. I didn’t know I had it. I just kept going. I felt dizzy. I felt fevers, but since I come from Cusco, from the mountains, and the university was in the hot area, I thought it was just the heat. I started to throw up, and still I didn’t want to go to the doctor. I said, ‘This is going to pass.’ Then I went on a hunger strike with other students, professors, doctors, nurses, and that’s when the typhoid got worse. But the hunger strike was very important to me. We were asking for health rights and protection for the prostitutes because in Trujillo there was a very large red-light district, and there were women coming from different parts of Peru. At the time I didn’t know much about human trafficking. But we knew the levels of exploitation, and there were a lot of sexually transmitted diseases. And because of that, we wanted to organize the women and develop a union with them.”

Viviana was on the hunger strike until one day she collapsed. “When I was unconscious, they took me to the emergency room. I was in a coma for a month. During that time, there was a moment when my mother and the doctors thought that I was going to die. That is the only time that I was fully conscious, fully aware of everything: my ability to choose, my inner power, my knowing of an existence of a different reality that is not this physical world.

“The moment I remember is suddenly I saw my mother, and the doctors and the nurse, and the boyfriend I had at the time, and a few of my other friends all gathered around me because they all thought that I was going to die. In the coma, I could see them. My mother was holding my hand, and she was pressing my hand and telling me, ‘Please, feel my hand, feel my hand.’ And I remember wanting to talk to her. I wanted to tell her, ‘I’m not dying, I’m here,’ but my body didn’t respond. They were telling my mother that they couldn’t keep the IV needles in me, that they couldn’t find more veins. They were going to look in my feet, they said, and a nurse touched my foot. For the first time in that month, I felt my foot. I felt it in a way that I cannot describe. I cannot explain that feeling of her hand on my foot. It was like it was entering my foot. It was like it was one with my foot. After that, I had this experience of choosing, and I thought, ‘What do I want? Do I want to come back?’ And I came back. I chose to be alive. And after that, I changed. It changed my life completely.”

veral years, Viviana worked with shamans in Peru and Mexico. She lived in California and studied transpersonal and integrative psychology. About two years ago, she returned to her homeland to develop a retreat center. Together with her husband, she also runs an orphanage called Niños del Sol. Viviana describes the village and surrounding mountains. “It is a place to remember your own magic, a place to educate your consciousness as you connect with the Mother Earth and all its elements.

Excerpted from  Birthing God: Women’s Experiences of the Divine

An excerpt from a time in my life when meditations were pulsatingly alive:

…Visions appeared, fragrant from another realm: oceans and forest streams with eddying pools where four-legged animals gathered to drink. During that period, as my body shifted toward change, toward menopause, my inner spirit opened itself to the larger Spirit, and I came face-to-face with God as Mother. Scenes unfurled on my inner eye in undulating landscapes, and she stepped into them.

In the visions, the Mother cared for me, providing me nourishment, clothing, walking sticks, and gemstone necklaces that spoke to me of my inestimable worth in her eyes. She midwifed my children, helping me to birth them into the world. And there were later visions of death and rebirth. I typed each one into my laptop.

“Today I saw myself emerging from the water, clothed in buckskin and with long black braids. But as I emerged, I saw pieces of myself break off like shards—shards of me falling away, splashing into the water. I was afraid, and I reached toward the sun, my Mother. The sun voice said, ‘Behold, here is my daughter, with whom I am well pleased.’ And I was a woman’s body again: curvy, voluptuous, pregnant, and, althou 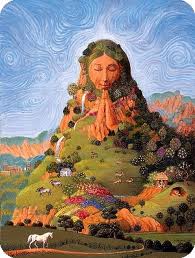 gh pregnant, old. I walked with a cane. I carried age in my bones. The time came for me to bring forth the child in my womb. I gripped a pole, and my Mother Midwife soothed me, stroking my hair, patting my brow dry, feeding me water to drink, and whispering words of encouragement in my pain. My pain was the labor of birth but the pain of not knowing, too. I heaved and groaned through the pains, and I birthed an adult—an androgynous human being that was as big as me, that merged with me, swirling like the symbol of the yin and the yang. This was My birth, I realized. I searched for my Mother God, and I heard her say, ‘I am here: in the rain, in the sun, and in the earth. I will always be there for you.'”

From Birthing God: Women’s Experiences of the Divine

Click to order Birthing God: Women’s Experiences of the Divine

Sitting still, letting go, I entwine myself in the ever-swirling dance of life. Breathing in, breathing out, I tap into the energy that flows in divine oneness. If I can relinquish the need to hang on to the worn-out story of my life, I can trust in the wider, fuller Divine that I am a part of, and I can set adrift the constant inner dialogue. Releasing the illusion of control—indeed my thoughts rarely control anything—I sink to the depths and rebound happy, or at least at peace.

Mark Nepo writes in The Book of Awakening:

It is amazing to consider how as infants we are one with everything. In time, of course, we learn how to distinguish between ourselves and others, between the world we carry inside and the world we move through. But ironically, the sages of all paths are those who, after lifetimes of experience, try to return to this primary state of Oneness.

When I think of the moments I have felt most alive, they all have the quality of joining  all-of-what-I-keep-inside  with everything-outside-me in a way that makes me forget myself. They all feel timeless and open-ended. Tenderly, the deepest moments of making love allow us to join in that Oneness beyond ourselves, as do certain moments of being immersed in great music or great open spaces. I have also felt this after long periods of swimming or running, or after long periods of being healthfully alone. I feel it when discovering what it is I need to write. Joy, it seems, is the feeling of that Oneness.

From The Book of Awakening by Mark Nepo

Richard Rohr, OFM had a great line today in his daily meditation. (They are awesome – you can check them out here!)

“The Christ never died—or can die—because he is the eternal mystery of matter and Spirit as one.”

I’ll forgive him the “he” because this idea is so thrilling. “The eternal mystery of matter and Spirit as one!”

I’ve been wanting a good definition of the word “Christ” for a while now. Literally, the Latin christus means the “anointed” or chosen one of God. But theologically, the “Christ” is understood to be something larger than Jesus, something which he embodied. Feminist theology speaks of Christ-Sophia as the Wisdom of God, the creative agency of God that formed the world and remains in and with creation, and that became human in the man Jesus of Nazareth. Christ is present in the “body of Christ,” the Church, and the “body…

Why Poets Should Write: Not For. … the money but because they love to write.” Lovely words from my friend Sarah Stockton.  I agree:  “The loving is in the writing.”

A redwood tree shades the slender daughter shooting up from her side: an apt metaphor, I think, or at least one that calms my heart. In a few weeks, my youngest child will leave home for college. I both hate and welcome this change. Every few days, a sudden nostalgia pulls at me when I am least prepared. The faint tunes of a familiar merry-go-round make my eyes tear up. My throat tightens when I pass the pumpkin patch lot, now empty. The playground nearby is newly remodeled, but I still hear the thrill in my young one’s voice calling out, “Look at me, mom! I’m flying!”

Leaning against the redwood’s scruffy bark, I blink away tears. The tall, quiet tree and the younger redwood growing from her side enlighten me. I cannot cling to the past, to the small warm fingers that reached for mine or the upturned face that beheld me as all-capable. The redwood trees, mother and daughter, anchor me for my task at hand: to applaud the young woman who I have nurtured from her tiniest beginning within me. I weep and I praise her both, for now I know. Entwined at the roots, we each reach for sky and light. We become, each in keeping with her dream. But the rootedness remains. For that I can be glad.

This summer, give the gift of Spirit-connected musings! Click to order Birthing God: Women’s Experiences of the Divine

In this month’s issue of Spirituality and Health Magazine, Rabbi Rami Shapiro interviews me on the Divine Feminine, excerpted here:

Lana Dalberg: The experience of Spirit in a body that gestates and nurtures life, or has the capacity to do so, merits exploration. Women, in addition to birthing, seek to meet their infants’ needs long before they can verbalize them. Women have honed this ability and are adept at connection. Their perspective is helpful in understanding the Divine Spirit who births and sustains all of life.

RR: Give us some idea of how women experience the Divine in ways men don’t or maybe can’t?

LD: The women in Birthing God relate a palpable sense of the Divine. They celebrate the Divine in the midst of dancing, singing, walking, wailing, menstruating, or meditating. They see the Divine in the birthing of children and in the dying of their loved ones. Theirs is an embodied experience of Spirit.

RR: How might our relationships and our world change if the Divine was more broadly seen and experienced as mother, midwife and sister?

LD: It would lead to greater compassion and assiduous efforts at making room for others’ experiences and viewpoints, and perhaps even the ability to trust in the surprises that can emerge from the darkness of the womb.

Read the full interview in Spirituality and Health Magazine May/June 2014 issue. Order a copy at