Thirty-three years ago today, four U.S. church women were martyred in El Salvador. They had been working with the Salvadoran poor, Ita Ford and Maura Clarke in Chalatenango, and Dorothy Kazel and Jean Donovan in La Libertad. They were returning from a retreat when their vehicle was stopped by the Salvadoran National Guard at a road block. Their desecrated bodies were discovered in a mass grave a few kilometers away. Today we commemorate Ita, Maura, Dorothy, and Jean, and what better way to celebrate their lives then to continue their legacy of working with the Salvadoran poor.

In honor of the U.S. church women martyred this day in 1980, I am excerpting from Birthing God: Women’s Experiences of the Divine my interview with Sister Teresa, who continues their pastoral work in Chalatenango.

Dressed in light cotton and sandals, Sister Teresa motions for me to take a seat in the tiny adobe-style house she shares with four other women religious in San Jose Las Flores, El Salvador. For nearly four decades, she tells me, she has lived and worked among Latin American’s impoverished communities. “For me, vocation has been very much defined as living my life among the poor.”

Still it was a big shock for Teresa—“un choque grande”—to arrive at the nearly destroyed community of San Jose Las Flores in the midst of El Salvador’s civil war. For Teresa, “the shock was to realize how far I was from the great suffering that so many people were living.” Yet one day, during her contemplation time, she heard God speaking to her inwardly. “It was a crisis but also a great revelation. God told me clearly in the words spoken to Moisés: ‘Take off your sandals, because this place, the place you are entering, is holy ground.’” At another time, Teresa recounts, “In a state of prayer, I felt Jesús come and take hold of my shoulder. ‘This is your place,’ he said. ‘I want you right here.’” 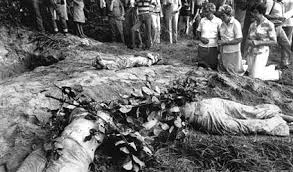 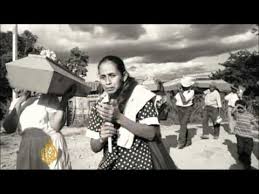 God was telling her in no uncertain terms that this community she was serving in the midst of extreme poverty, isolation, and war was holy, the dwelling place of the Almighty. “After that experience, each day I felt more dedicated, with greater commitment—entrega—because to me it was clear that the people were the face of the suffering, crucified Christ, with their willingness to give their lives for the good of all, and at the same time, they also exemplified the resurrected Christ with their vitality, solidarity, and courage.”

Sister Teresa describes the constant shelling in the surrounding hills, the periodic military incursions and occupations of their small village, the strafing of helicopters flying overhead, and the fear that these acts generated. “During the war,” Teresa says, “the Armed Forces High Command required that I and the other sisters with me report to them every two weeks. When we left the community to go report ourselves, the people entered into a state of fear. When we returned, they shouted, ‘Ay! The sisters have returned!’” Teresa laughs. “We didn’t feel that it was really about us, but rather that the people felt this presence of God that for them was tangible with our reappearance.” The people also perceived God’s accompaniment, Teresa says, in the miracles they witnessed as they survived attack after attack on their community.

She stretches out her hand and places it on the flower-dappled tablecloth. “This is my experience of God, in the people who are an expression of the incarnate Christ. In the midst of the war, the people here showed joy, solidarity, and compassion. They were available to one another. When terrible things happened, they were afraid; they wept and trembled, but nothing stopped them from having faith and moving forward. It was an experience that changed my way of being.”

Teresa ducks her gray head slightly before revealing her affluent background. “See, I am from the bourgeoisie in my country, and I was able to study. But my greatest education has been the poor, to see their living conditions, to feel how everything is denied them, to feel how much they are underestimated, how much they are despised. I feel their condition in my being”—her hand moves to her chest—“and their reality changed me, converted me. Encountering the poor, you encounter yourself with God in a totally different way.”

Excerpted from “Teresa: God Among Us” in Birthing God: Women’s Experiences of the Divine .