In my early forties, an amazing thing happened. I began meditating daily, at first in my bedroom closet so as not to awaken my husband, and later in a small room he built for me in the garage. In those precious moments of meditation, I let go of fears and other distractions and rested gently in the breath. Visions appeared, fragrant from another realm: oceans and forest streams with eddying pools where four-legged animals gathered to drink. 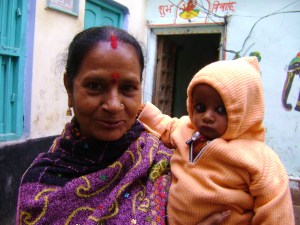 During that period, as my body shifted towards change, towards menopause, my inner spirit opened itself to the larger Spirit, and I came face to face with the Mother. Scenes unfurled on my inner eye in undulating landscapes, and She stepped into them. A tall African woman, the Mother was someone my heart recognized instantly. There were others, including Joan of Arc, armored and mounted on her horse, and several indigenous images of Mother.

In the visions the Mother cared for me, providing me nourishment, clothing, walking sticks, and gemstone necklaces that spoke to me of my inestimable worth in Her eyes. These waking visions were reinforced by dreams and gave rise to my desire to know other women’s stories and to hear their experiences of the Divine. After interviewing nearly fifty women of different faiths, I realized that however we name Spirit, we receive it with deep-hearted openness. Like Mary, our lives are the surprise that begins with the response, “Let it be.”