My daughter is going to Standing Rock in North Dakota on Wednesday. I feel she is going for all of us, to defend our rights to clean water and to fulfill our responsibilities to protect the earth. I worry for her, with all the haters out and about, but I see her bravery. I applaud her solidarity with the Standing Rock Sioux and other indigenous nations, the heart of today’s resistance to the beast that is devouring our planet. 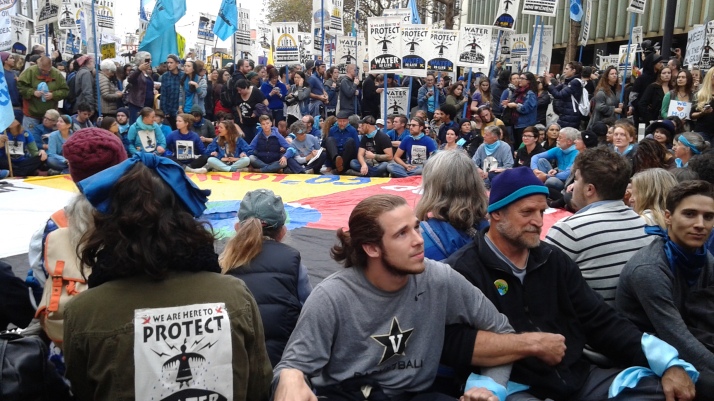 The resistance spans the globe. DNB, the largest bank in Norway, just announced that it sold its assets in the Dakota Access Pipeline and is considering terminating its loans to the project. On Tuesday, 300 protests took place. Here in San Francisco I partook in a march to the local office of the Army Corps of Engineers, the agency in charge of permitting for the pipeline section that threatens the integrity of the Missouri River and Standing Rock sacred sites. Hundreds of us spiraled around those risking arrest for their opposition to the pipeline. As Native American men drummed and prayed, their voices rose like the sage smoke wafting from abalone shells, and the rest of us pressed together, ten and twelve abreast, to circle round, circumambulating and blessing the people risking arrest. It was a powerful moment, a joining of prayers and hope.

We can stop this pipeline. Here are a few things you can do today:

Call the Army Corps of Engineers and demand that they reverse the permit to build the pipeline: (202) 761-5903

Donate directly to the Standing Rock Sioux tribe to support their fight.